How to baby proof electrical outlets

Whether you’ve got a new baby on the way or your family is moving into a new house, it is important to make sure that your little ones will be safe. As adults we may easily overlook the dangers of electricity – having long ago learned how to safely interact with this ubiquitous force.

However, the reality is that the natural curiosity of infants, toddlers, and small children puts them in harm’s way and we have to take steps to ensure their safety around power outlets. Installing modern tamper resistant outlets is your best solution, although this article will discuss your complete range of baby safe options.

The sad truth is that safety guidelines are generally the product of much suffering – and the recommendation for baby proof outlets is no exception. Each year nearly 3000 children are admitted to the hospital with injuries caused by electrical outlets. The injuries range in severity from minor burns to life threatening heart arrhythmias. Toddlers are at greatest risk and the most common foreign objects inserted into outlets are keys and hairpins.

Outlets are prime candidates for an inquisitive toddler as they are positioned right at their height along the walls that they use to support their early steps. In addition to their baby-accessible location, power outlets are frequently used by adults, and toddlers and babies love to imitate what they see their parents doing. Finally, standard 3-prong power outlets seemingly have little faces – infants as young as 10 months can recognize face-like images and give objects with faces extra attention. Taken all together, an uncovered outlet is a very real danger to your children. 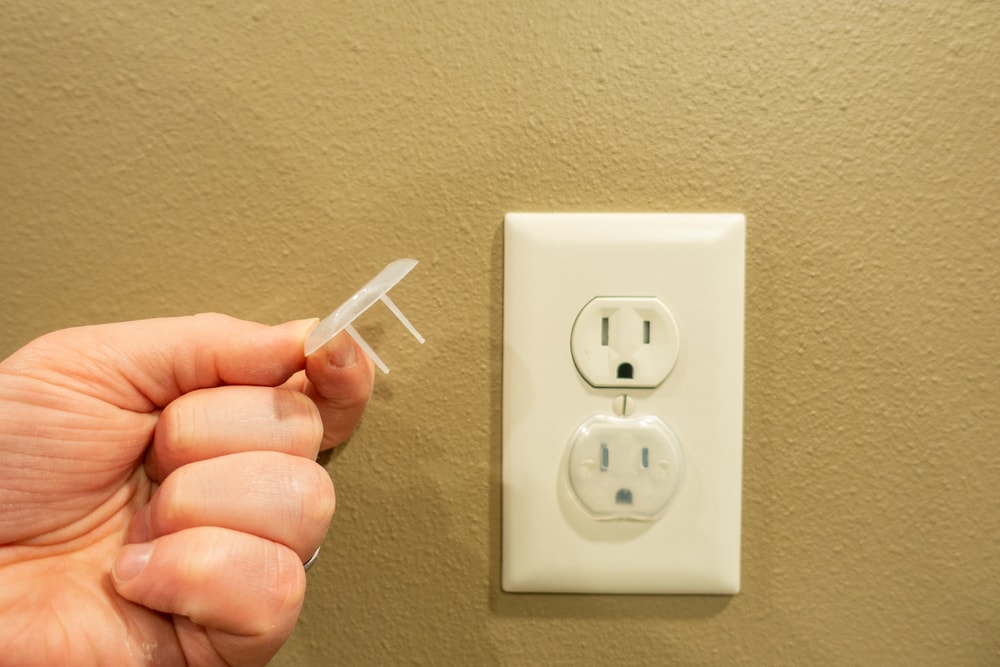 In the old days outlet covers were simple, and consisted of a 2 pronged plastic cap which plugged directly into the outlet, preventing unwanted objects from entering. These plug-in outlet caps are still on the market and can be a useful temporary solution for electrical safety.

However, it has long been known that this style of outlet cap offers only minimal protection. A study conducted in 1997 found that of 37 toddlers tested (aged 2-4) 100% could remove a common variety of clear plastic outlet plugs from an outlet. The average time it took them to do this was less than 10 seconds – meaning anything less than constant vigilance would be insufficient to keep your toddler safe.

The good news is that there are plenty of better designed removable outlet plugs on the market, many of which are readily available via Amazon or at your local hardware store. Look for styles that include locking mechanisms that are designed to keep small hands at bay.

However, no matter how well designed a plug is, the reality is that removable plugs are inconvenient and still present their own risks. In order to use an outlet with a plug you’ll have to remove the plug and set it aside – where it potentially poses a choking hazard. And, then you’ll need to remember to replace the plug afterwards – which isn’t a huge burden, but is yet another thing to remember.

If you have a house newer than 2008 then it is likely that most or all of your outlets are of the tamper resistant variety. Tamper resistant receptacles, or TRRs have been required by the National Electrical Code since 2008 for most household outlets. TRRs work by using spring-loaded shutters which prevent foreign objects from being inserted into the outlet. Only when even pressure is applied across both sides of the outlet will the shutters move aside.

TRRs are readily identifiable by the letters TR emblazoned on their fronts, and usually the shutters are easily spotted once you know what you’re looking at. These outlets have significant advantages over plugs as their self-closing design means you don’t have to remember to do anything after you unplug a cord to still have a childproof outlet.

Tamper resistant outlets come in all styles – including GFCI outlets – so it is highly unlikely that any of your standard outlets won’t have a suitable replacement. Switching a few outlets is typically an easy DIY project, although if you’re going to do a whole house’s worth you are probably going to appreciate handing the task off to a licensed electrician.

If replacing outlets is completely out of the question, there is a middle ground: sliding outlet covers. These covers operate on a similar principle to TRRs, using a spring-loaded shutter to keep the outlet safe. Unlike TRRs the shutter is typically operated manually instead of automatically when a plug is inserted – this may make these outlets easier for determined children to investigate, as the spring-loaded mechanism is exposed to questing fingers.

This type of plate cover is secured to the wall outlet using the existing screw mounting points. However, this means that decora-style electrical receptacles with clip-on plastic outlet covers will not be compatible with this type of cover. In these cases you’ll need to either use a plug or replace the outlet with a TRR version.

While the former outlet covers have been focussed on keeping unwanted things from being plugged into the outlet, there are plenty of times where you’ll want to prevent wires from being pulled out of the outlet. For wires that are left plugged in at all times (like lamps, TVs, or routers) you may want to install a box-style electrical plug cover. These boxes are screwed onto the existing outlet and prevent power cords from being removed.

Box-style covers have the added advantage of preventing unwanted entry into outlets, although their bulky appearance often makes them an unwanted addition where they are not absolutely necessary.

The best choice for outlet plug covers is tamper resistant outlets. These outlets are easy to use and impossible to forget to reset after you’re done using them. If you don’t have TRRs installed in your house, the next best option is a sliding-style outlet cover. With their spring-loaded shutters and screwdriver-secured design these offer nearly the same level of protection as tamper resistant outlets. 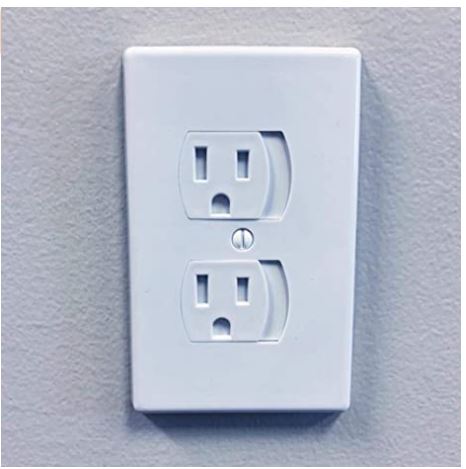 In the event that your house uses clip-on plastic outlet covers you may find that adding a sliding plug cover isn’t an option. For these outlets you will want to use a locking plug-style outlet cover like those sold under the Safety 1st brand name. These covers offer highly effective child safety as long as you remember to replace the outlet cover after each use.

While convenient, the cheap plastic plug covers do not offer enough protection to be recommended. Worse, they may even generate a false sense of security and lull parents into complacency. Only use these on a temporary basis when no other options are available, and remember that it can take a 2 year old less than 10 seconds to remove one from the wall.

Don’t forget to baby proof these other outlets!

When baby proofing your house you have to remember that toddlers experience the world with outlets at eye level. While you may not be able to easily see (or reach!) an outlet that’s under a table, it is a prime target for someone who is just three feet tall! Don’t forget about outlets in the garage, just because they’re out of sight doesn’t make them any less of a hazard.

Even if you have tamper resistant outlets, another risk to consider is power strips. There are surprisingly few baby proof power strips on the market, although there are a few models that include power strip covers that make accidental electrical shock less likely. Be sure to install plugs on all unused power strip outlets.

Extension cords are another potential hazard – when not in use these electrical cords should be unplugged and stored. If an extension cord is being used long term, consider using a cord cover to keep the wire and its connections out of reach. If “long term” means forever, you may want to have an electrician install a safer permanent solution.

Another risk to consider with extension cords, and long cords in general, is they pose a trip hazard. Use a cord shortener or zip ties to shorten cords to the minimum length necessary. Keep in mind that a non-trivial number of electrical injuries in children happens when a child bites an electrical cord – wires with lots of extra slack are especially high risk.

If you’re looking for the best option for baby safety the answer is simple: install tamper resistant receptacles. They offer the functionality and appearance of standard outlets but provide enhanced protection. As a runner up, spring-loaded outlet covers offer nearly the same level of protection for young ones. Plug-style outlet covers aren’t ideal and are only as effective as their locking mechanism and your ability to remember to replace them after use.

If you’ve got a new baby on the way or just want to ensure that your home’s electrical system is safe, Rytec Electric offers home electrical inspections throughout South Carolina, North Carolina, and North Georgia. Schedule your appointment today to keep your family safe. 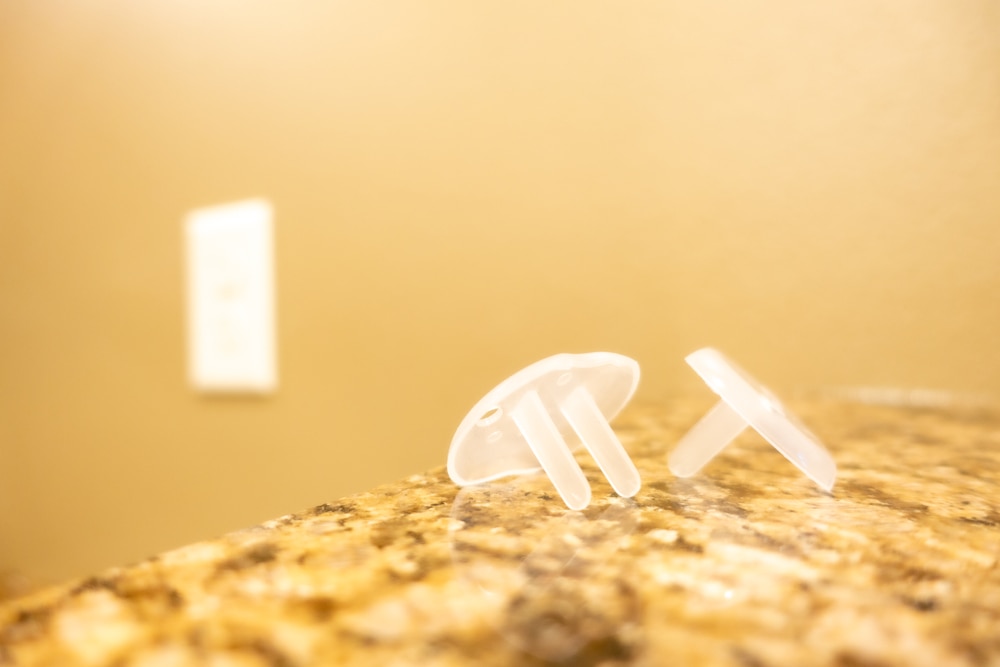 ← What is an electrical short circuit How do I select a home standby generator? →