What’s the Difference Between A Power Strip and A Surge Protector?

You’ve probably heard someone talking about a surge protector or a power strip in the past, but you’re not positive what the difference is between them. Knowing what they are and what they do is a quick way to protect the electronics in your home. Let’s talk about them and answer any questions you might have.

What Is a Power Strip?

A power strip is something you might have seen a thousand times already. It’s a long strip with a bunch of outlets in it. It has a cable on one end, and nothing on the other end. The cable plugs into an outlet in your wall, and then the strip gives you multiple outlets to power your devices.

Everything you plug into the outlets on the strip will be powered by the outlet it plugs into on the wall. The purpose of a power strip is to give you extra outlets to plug things into. Who doesn’t love extra outlets? You can think of it like an extension cord on steroids.

Keep in mind, power strips can only handle a certain amount of watts. In a typical 120V home, a standard power strip can handle up to 1800 watts (the same as the wall outlet). If you’re not sure, the wattage is printed somewhere on the power strip’s box and on the bottom side of the strip itself.

Putting in too many devices that require too many watts can result in overheating, electrical failure, and even an electrical fire. Your device can also get overloaded if you plug in the wrong kind of device. For reference, floor heaters should never be plugged into a power strip. It makes sense when you think about it: all of this power is coming out of a single outlet. Your outlet doesn’t have infinite energy that it has to offer.

Main Uses for a Power Strip

The biggest use for a power strip is getting more sockets to plug devices into. Standard wall outlets around your home only have two sockets – so what happens when you want to plug in three devices? This is where a power strip comes in handy.

Another reason to use a power strip is because they’re so easy to turn on and off. Many options have a single on/off switch that will kill power to all of the connected devices. It makes it easier to control a handful of electrical devices at the same time. Now that you know more about power strips, let’s talk about surge protectors. 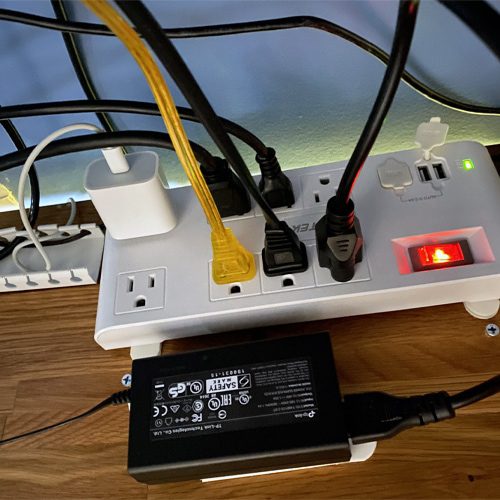 What is a Surge Protector?

The idea of a surge protector might be a little confusing at first. A surge protector is a type of electrical socket that – believe it or not – protects your device from a surge.They use a specialized circuit that redirects spikes of electricity right into the ground without going through the electrical device. You can think of it like a valve that only kicks on when higher than normal electricity is detected. Redirecting this power means your device won’t get fried.

It’s worth mentioning that most surge protectors work just like a power strip, many times they look like a really buff power strip. There are outlets for you to plug your devices in, and typically an on/off switch as well. But, surge protectors cost much more than a normal power strip because of the specialized circuit used to protect your electronics. Many people think because they look the same, they do the same and a power strip is cheaper so they usually default to that option. This is a bad choice because power surges can destroy your electronics.

What is an Electrical Power Surge?

A power surge is when your supply of electricity is interrupted. Your devices rely on a steady stream at all times. Power surge can happen when a big appliance turns on (like your AC unit or fridge), when lightning strikes, or when an electrical transformer is hit by something. Additionally, the power delivered from your electric company doesn’t always provide a smooth stream of electricity. Any of these scenarios will temporarily disrupt how much electricity is flowing to the devices around your home.

Surges can vary when it comes to how serious they are. Something like a lightning strike is considered a major surge. When there’s a major surge, electrical appliances and devices can fry, melt, and malfunction. Without a surge protector, you’ll need a professional emergency electrical contractor to help you. It often comes with irreversible damage.

Small surges and micro surges will also do damage over time. The wires and circuits inside of your devices will slowly degrade before the unit stops working. It’s almost like comparing a million punches from a kid versus a single punch from a bodybuilder – both of them definitely do damage.

This highlights the importance of a surge protector. It keeps your devices safe against small or large surges because surges happen a lot more often than you realize. 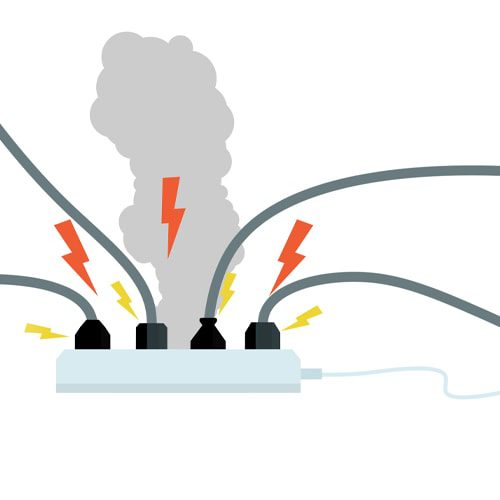 How Often Do Power Surges Happen?

The truth is that your home might go through a dozen small power surges a day. Major surges are less common, and they usually happen during a thunderstorm. When lightning strikes a power line outside, a lot of your electrical devices are at risk.

What Electrical Items Are at Risk in a Surge?

Things like dishwashers, TVs, computers, and washing machines are all susceptible to a power surge. Going through a large surge can irreversibly destroy any of these devices.

Since these are all expensive items, it shows you how important a power surge really is. A few bucks on a surge protector can save you hundreds or thousands in damages. That is, as long as you pick the right one.

How to Select a Surge Protector

Not all surge protectors are the same. They have a certain amount of surge that they can protect you from. This protection is measured in “joules”, which is a unit that tells you how much energy is getting through.

Main Uses for a Surge Protector

If you talk to an electrician before renovating your home, they can professionally install different surge protections throughout the house. You can also use surge protectors in your home office. Think about how many sensitive electronics are used: a computer, printer, fax machine, and monitor.

Not only will a surge protector keep these expensive devices alive, but they’ll also allow you to plug in many devices in a small area. You might think these are very similar to power strips, but there are some big differences.

A power strip gives you the ability to plug multiple devices into a single wall outlet. A surge protector is a type of power strip which is specifically designed to withstand a power surge and keep your electronics safe.

What’s the Difference Between a Power Strip and a Surge Protector?

After learning about both of these products, you might wonder what the difference is. Not to worry, we’ll tell you all about it.

The Level of Protection

The level of protection that you get is the biggest difference between the two. This is really important to keep in mind: A power strip offers no additional protection. If there’s a surge, then your expensive TV can get fried and destroyed.

A power strip does nothing besides give you extra sockets to plug into and an easy on/off switch. If you want any protection at all, you need a surge protector. A surge protector is designed to create a protective barrier around the products plugged into the protector. 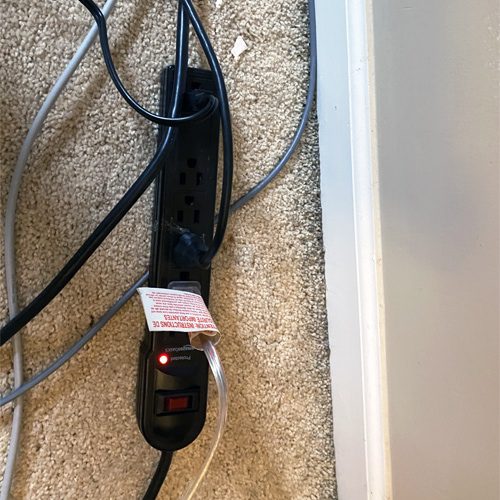 A surge protector is typically more expensive than a standard power strip. This should be expected since it offers a level of protection. It’s not a huge difference, though. It’s a matter of an extra 5 or 10 bucks. You can easily find a good power strip or surge protector for less than $30.

Which is Better, a Power Strip or Surge Protector?

As you probably figured out by now, there is a lot of overlap between these two items. For that reason, it’s hard to say one is way better than the other. If you have sensitive devices that you want to protect from power spikes, a surge protector is the best option.

If you’re looking for a low-cost way to add devices to a single outlet and easily turn them on and off, a power strip will get the job done. With that said, a surge protector works in this case too, if you’re willing to spend some more money.

Knowing where to put a power strip or a surge protector is a big deal. Putting a surge protector in the right place can save your expensive electronics. If you want a professional to help, you can always reach out to us. When you call Rytec, we’ll take a look at your property and give you expert advice.

← How Do Electrical Fires Start? What Appliances Use the Most Electricity? →